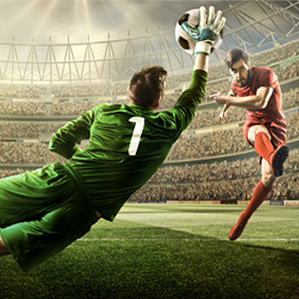 In January 2015, the Dutch Football Association KNVB, received some signals regarding a possible manipulated match by an Albanian club, KF Skënderbeu Korçë. This club played friendly matches against Dutch clubs during the winterstop in Spain. The Dutch FA approached GLMS through its member De Lotto (now Nederlandse Loterij), asking for insights into the betting patterns of the matches in question.

“When we heard of these signals we started an investigation into this matter. We contacted our national lottery partner and asked if GLMS detected suspicious betting patterns. A few hours later we received reports from GLMS based on odds movements from the international, Asian and lottery markets and from the GLMS-members point of view.” Wouter Boshuis, Dutch FA Integrity Officer

Skënderbeu is now well known in the match fixing sanction record as the European football governing body (UEFA) has taken the club through a long and demanding yet successful disciplinary procedure. Indeed, in July 2016, the Court of Arbitration of Sport (CAS) dismissed Skënderbeu’s appeal against UEFA decision to ban the club form the Champions League for one season due to its involvement in fixed matches (source UEFA).

Thanks to a long-standing operational partnership, GLMS (previously acting on the European level as ELMS) had shared information on diverse occasions with UEFA concerning risks surrounding the Albanian club.

The words of thanks received last month by GLMS from the Dutch football association is an important recognition of the value and impact of the lottery association cooperation. Indeed, it demonstrates that reactive feedback can help in some specific cases for an informed stakeholder decision.

“With this valuable information we could advise our clubs to organize friendly matches in the future against opponents they know, and not to organize matches against teams with a questionable reputation.” – Dutch FA

GLMS serves as a preemptive tool to its members and other parties with such on-demand requests. It is central to the cooperation between sports organizations and all stakeholders on sports betting features worldwide and associated risks.

GLMS is the state lotteries’ mutualized monitoring system on sports betting. It aims at detecting and analyzing suspicious betting activities that could question the integrity of a sport competition. Building on six years of experience with the establishment in 2009 of ELMS with European Lotteries, GLMS went global in January 2015 extending the network to other continents. GLMS facilitates the sharing of sports betting information as part of the collective efforts of its members in ensuring sports integrity globally, and is dedicated to effective cooperation with all key stakeholders: regulators, law enforcement authorities, sports organizations.