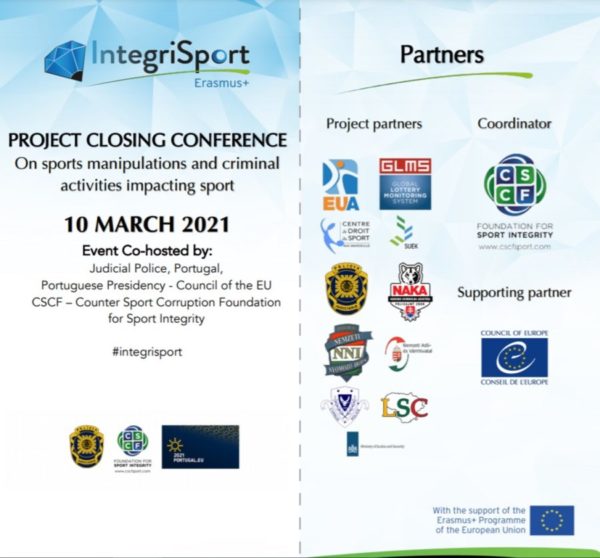 GLMS’ first partner project, “IntegriSport Erasmus+ project (2019-2020) came to an end with its closing event organized by project co-ordination, CSCF Foundation for Sport Integrity, on Wednesday 10th March, on the topic of sports manipulations and criminal activities impacting sports targeting law enforcement and judiciary. The event was hosted and opened by the Portuguese EU Presidency and included keynote speeches from the Portuguese Judicial Police, Interpol and interventions by the project partners, including national law enforcement, GLMS, University of Aix-Marseille and EU Athletes”.

The EU-funded IntegriSport Erasmus+ project came to its conclusion after a journey spanning 2 and a half years, for participants of the project and key stakeholders in the domain of fighting sports manipulations. Being the first of its kind, the project was conceived as a response to limited in-depth knowledge about sports manipulations of a stakeholder not traditionally linked to sport – the national  law enforcement and judicial sector.

In that way, IntegriSport Erasmus+ has served as a vehicle to raise awareness, increase cooperation, and provide support to law enforcement and judicial authorities in their fight against, not only sport manipulation, but also other related criminal activities which negatively impact sport, such as corruption, fraud, money laundering and conspiracy, among others.

The IntegriSport Erasmus+ project acted in seven countries (Cyprus, Finland, Hungary, The Netherlands, Lithuania, Portugal, The Slovak Republic) bringing together the efforts of 11 national, European and International partner organisations coordinated by CSCF Foundation for Sport Integrity, that recognise the complexity and seriousness of this phenomenon, the danger it poses to the development and credibility of sport at national and international level, and the need to cooperate closely to tackle it effectively.

This cooperation was reflected in the commitment to the Council of Europe Convention on the Manipulation of Sports Competitions (the Macolin Convention), a fundamental text that prevails on this issue. The Convention was generally used as a framework during the execution of the project with regard to comparing national regulations and creating opportunities for international cooperation among the partners.

GLMS was involved as a betting stakeholder, directly and through its members present in the beneficiary countries, namely, Jogos Santacasa (Portugal), Veikkaus (Finland), Nederlandse Loterij (The Netherlands) and Szerencsejatek Zrt (Hungary), providing training on better understanding the role of the national level betting operator, interpreting monitoring reports and encouraging co-operation between law enforcement and the betting operator in tackling sports manipulations. 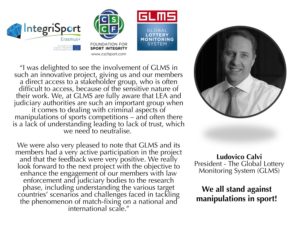 The closing event served as the ideal setting during which the partners presented their experiences and learnings throughout the project, discussed success stories, exchanged best practices.

One of the key points for the success of the event was the support of the Portuguese Presidency of the Council of the EU, who opened the event, as well as the considerable efforts made by the Integrisport’s national partner, the Ministry of Justice & Judicial Police, Portugal as a host, together with the co-ordinator CSCF – Counter Sport Corruption Foundation for Sport Integrity.

“The [Integrisport Erasmus +] project has shown that if law enforcement and the judiciary are involved in this fight, as the Portuguese Judicial Police has been, the diligent work of other sports stakeholders in the early stages can turn into effective actions”, said Ms. Luísa Proença from the Ministry of Justice- Portuguese Presidency of the Council of the EU.

Moreover, Mr. Luis Neves, National Director of Judicial Police – Portugal emphasised that “The Conference enhances the discussion of those present, predominantly focusing on the experience of each partner, thus providing for a holistic approach and a deep reflection on the current challenges faced in the combat against corruption and manipulation in sport”.

In addition, the event welcomed the participation of invited speakers from beyond the international partner organisations (GLMS, EU Athletes), including Interpol and the Council of Europe, as well as the presence of representatives of various organizations that currently play a key role in the development of policies that seek to strengthen and care for sport integrity on and off the playing field, such as the IOC, UEFA, and World Lottery Association (WLA), among other.

“Providing constant and tailored capacity building for law enforcement is proven to be crucial to fight sports manipulations and it is an important task for Interpol. I believe that the awareness  Integrisport Erasmus+ gave to law enforcement good understanding of how to implement the operational response and is complementary with our education programmes”, pointed out Claudio Marinelli, Criminal Intelligence Officer and Project Manager at INTERPOL.

Elda Moreno from Council of Europe, also highlighted the importance of joint efforts and cooperation “The Macolin Convention provides a unique legal and cooperation framework to effectively prevent, detect and sanction the manipulation of sports competitions. Integrisport has been very effective in showing the key role that law enforcement and the judiciary play in this context”..

Norbert Rubicsek, director of CSCF and project manager of IntegriSport Erasmus+ added: “I am delighted and proud that through the Integrisport project, our Partners have achieved the main objective of Integrisport Erasmus+: to raise the knowledge of investigators, prosecutors and judges on sports manipulations and enhance their cooperation with thier national and international partners”.

Finally, it was stated that the project will continue with a new project from 2021-2022. During the event, the CSCF Foundation for Sport Integrity was delighted to confirm the continuation of the project with the announcement of IntegriSport Next. IntegriSport Next will act in six countries: Cyprus, Estonia, Finland, Georgia, Malta and Sweden (See link for more info), together with international partners, GLMS, FIFPro (supporting partner) and KU Leuven as the research partner. 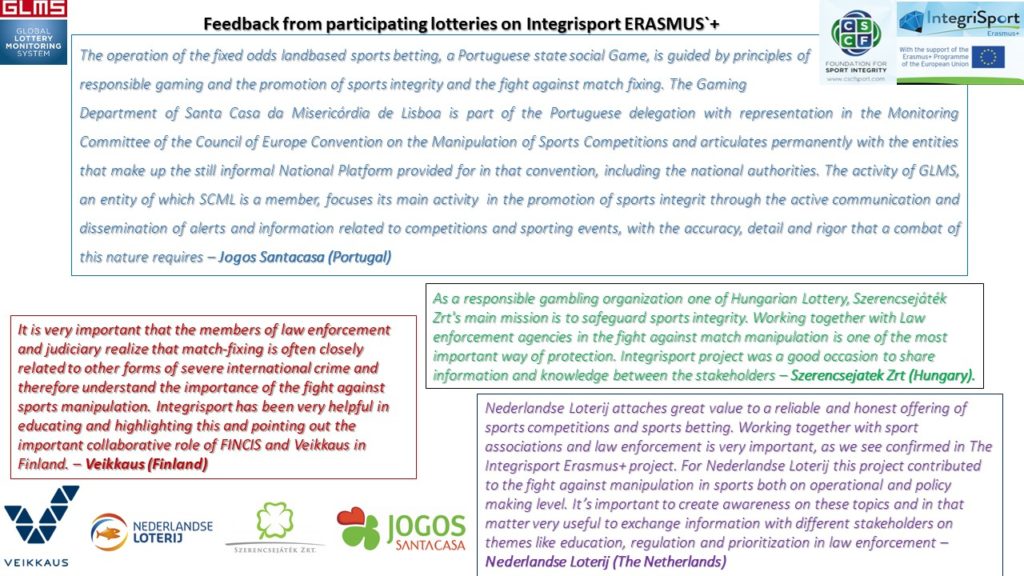 During the two and a half years, each of the participating organisations made a significant contribution in each of the project phases that, despite the adversities brought about by the COVID-19 crisis, were carried out successfully.

A particularly important outcome mentioned by all the Partners was that the Integrisport Erasmus+ project contributed to their fight against sports manipulations at operational and policy making levels. Internal education on the phenomenon, increasing or redifining cooperation with other national stakeholders, changing regulation and swift of priority in law enforcement.

The project had three waves of evaluation, prior to training sessions, immediately following the training sessions and then a few months after the sessions. The results overall illustrated that there was a notable increase in the knowledge of law enforcement and judiciary of the beneficiary countires in a number of areas linked to sports manipulations, including virtual currencies, investigative techniques and understanding related areas such as sports betting  and national and international co-operation.

Notably, the feedback also highlighted the increase in trust by law enforcement and judiciary participants in other stakeholders, including sports federations, betting monitoring reports and an awareness of the need to work with athletes who are often a pawn in wider manipulations.

The project and its partners

The IntegriSport Erasmus+ project acted in seven countries (Cyprus, Finland, Hungary, The Netherlands, Lithuania, Portugal, The Slovak Republic) bringing together the efforts of twelve European organisations that recognise the complexity and seriousness of this phenomenon, the danger it poses to the development and credibility of sport at national and international level, and the need to cooperate closely to tackle it effectively: